You are here: Home / MidEastGulf / US soldiers in Syria to back anti-IS Kurds 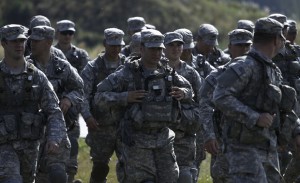 U.S. soldiers are in Kobane, the town in northern Syria nearly destroyed in fierce fighting with the Islamic State group, to train Kurdish forces to battle the jihadists.

Mustapha Abdi, an activist in the town on the Turkish border, told AFP the American instructors had arrived “in recent hours,” France 24 reported on Thursday.

A source with the Kurdish People’s Protection Units said the Americans would help plan offensives on two Syrian cities held by IS — Jarablus and the jihadists’ Syrian “capital,” Raqa.

As UNIAN reported earlier, at least 50 US troops were deployed in the city of Kobani in northern Syria.

In early November, it was reported that if the United States finds a new group in Syria, ready to fight against the Islamic state, Pentagon chief Ashton Carter and President Barack Obama were ready to send in more troops.