You are here: Home / MidEastGulf / US set to speed arms shipments, training for Iraq tribes 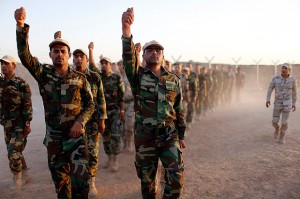 US President Barack Obama is poised to quicken the pace of weapons supplies and training to Iraqi tribes, while eyeing a rapid offensive to recapture Ramadi from the Islamic State group.

Obama huddled on Tuesday with his national security team at the White House to plot a way forward after the loss of a strategically vital town on the steps of the capital Baghdad.

Following the meeting — which included the heads of the CIA and Pentagon, National Security Council staff and Secretary of State John Kerry via secure phone link – officials indicated Obama was ready to ramp up assistance to Sunni tribes that dominate the province around Ramadi.

“We are looking at how best to support local ground forces in Anbar” National Security Council spokesman Alistair Baskey told, “including accelerating the training and equipping of local tribes and supporting an Iraqi-led operation to retake Ramadi.”

Ramadi – just a 90-minute drive from Baghdad and a gateway to Syria, Jordan and Saudi Arabia – was overrun by terrorists jihadists on Sunday.

The audacious military victory was a major blow in the battle to degrade and ultimately defeat the Islamic State, calling into question Obama’s strategy and the authority of his ally, Prime Minister Haider al-Abadi.

The White House had earlier described the loss of Ramadi, despite a sustained US air campaign, as a “setback,” but played down suggestions that the war is being lost.

“Are we going to light our hair on fire every time that there is a setback in the campaign?” asked White House spokesman Josh Earnest.