You are here: Home / MidEastGulf / US set to sell $11bn combat ships to Saudi Arabia 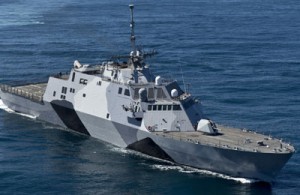 The US State Department has approved the sale to Saudi Arabia of four Littoral Combat Ships for $11.25 billion, a Bloomberg report said quoting a US official.

The sale, under the Foreign Military Sales program, is aimed at bolstering defenses of Washington’s Gulf allies after the nuclear deal with Iran, the report said.

The approval allows the Saudis to negotiate contracts for the ships unless Congress passes legislation to block the deal.

The ships are part of a planned modernisation, replacing older US-built vessels in the Royal Saudi Navy’s Eastern Fleet.

The Littoral Combat Ship, designed for operations in shallow coastal waters, is made in two versions by Lockheed Martin Corp and Austal Ltd. The Saudis have indicated they’re interested in the Lockheed ship, according to previous reports, including by Defense News.