You are here: Home / MidEastGulf / US sends fighters, personnel to Turkey to fight against IS 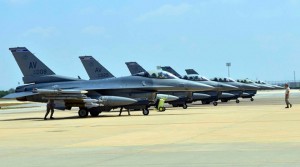 Six U.S. Air Force F-16 fighter jets and about 300 personnel have arrived in Turkey to support the fight against the Islamic State (IS) in Iraq and Syria, the Pentagon announced.

The F-16s, support equipment and the U.S. personnel arrived Sunday at Incirlik Air Base, Turkey, from Aviano Air Base, Italy, to support Operation Inherent Resolve against the IS, said Pentagon spokesman Jeff Davis in a statement.

The warplanes will begin flying missions against IS in the coming days, Davis said, adding that the primary strategic benefit of operating from Turkey is that “it gives us greater proximity to the targets we need to strike.”

The detachment is from the 31st Fighter Wing based at Aviano Air Base in Italy, according to a statement from the U.S. European Command, and follows Turkey’s decision to host the deployment of U.S. aircraft conducting counter-IS operations.

As members of a more than 60-nation coalition, the United States and Turkey “are committed to the fight against IS in the pursuit of peace and stability in the region,” the statement said.

About 1,800 U.S. personnel are stationed in Incirlik Air Base, which is a U.S. Air Forces base in NATO countries. Before the arrival of the F-16s, the U.S. military had been conducting armed unmanned aerial vehicle (UAV) flights out of Turkey for a week. Prior to that the U.S. military only flew unarmed UAVs for the purpose of intelligence, surveillance and reconnaissance.

Meanwhile, the Pentagon said that U.S. and coalition military forces continued Monday to attack IS targets in Syria and Iraq, with bombers, fighters and UAVs conducting eight airstrikes against IS positions, structures and vehicles in Syria, and 21 similar airstrikes in Iraq.