You are here: Home / MidEastGulf / US seeking to boost role of Iraq’s Sunni tribes in anti-ISIS campaign 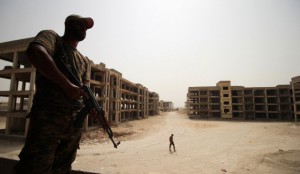 The United States is seeking to give Anbar tribes a greater military role in the fight against the Islamic States of Iraq and Syria (ISIS) whose fighters seized much of the western province in early 2014, informed tribal source have said.

Speaking to Asharq Al-Awsat on the condition of anonymity, the source said US forces operating in Iraq have been providing weapons and ammunition to Iraqi tribal fighters positioned near the cities of Fallujah and Ramadi in the Anbar province.

The military equipment is being transferred on a daily basis by US cargo planes that land at the Habbaniyah Airbase in east of Ramadi without consulting with the central government in Baghdad, the source said.

“For about a month, US forces have been working towards fully handing the province’s security file to the tribal forces, having suspended the role of the Iraqi army and pulled the Popular Mobilization fighters from the environs of Ramadi as well as banned them from even coming near Fallujah and its villages,” the source added.

The government of Iraqi Prime Minister Haider Al-Abadi has largely relied on a coalition of mainly Shi’ite militias known as the Popular Mobilization (or Al-Hashid Al-Shaabi) to drive ISIS out of Anbar.

However, many in Iraq have expressed fears that the Popular Mobilization may carry out acts of revenge against Sunnis whom it accuses of backing ISIS.

According to analysts, Washington’s efforts to achieve sectarian balance within the forces battling ISIS in Iraq have played into the hands of the ultra-radical group.

“This has given a great opportunity to ISIS to strengthen its lines of defense around Ramadi through the use of tunnels and the course of the Euphrates,” Abdul Karim Khalaf, a military expert, said.

The US-led coalition against ISIS has recently come under pressure, with many government officials and tribal leaders in Iraq questioning its ability to liberate Anbar after freezing the joint operations conducted by the Iraqi army and the Popular Mobilization in Ramadi and Fallujah.

Mohamed Al-Dulaimi, a spokesman for the tribes battling ISIS in Anbar, blasted the US move as “not serious” and aimed at “rupturing the unity of the Iraqi joint operations command having come close to achieving its goal of liberating Ramadi.”

Meanwhile, Karim Al-Nuri, a Popular Mobilization commander, said his forces were continuing their fight against ISIS and that talk about them pulling out of the western province was “unfounded.”

“[The Popular Mobilization] does not need to wait for a license from anyone and it is continuing to fight ISIS.”