You are here: Home / MidEastGulf / US says operation to recapture Raqqa could begin before battle for Mosul ends 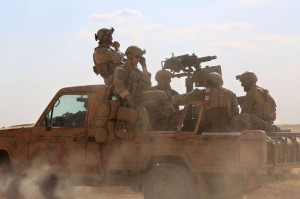 Leaders from 13 US-led coalition nations have been meeting in Paris to discuss their next moves in the campaign to destroy IS.

US Defence Secretary Ash Carter signalled that a push to start isolating the group’s stronghold at Raqqa may not be far off.

“We’ve already begun laying the groundwork with our partners to commence the isolation of Raqqa. As we meet here, we’re helping to generate the local forces that will do so,” Mr Carter told a news conference in Paris.

“This is one of our campaign plan’s core objectives, destroying ISIL’s parent tumour in Iraq and Syria. And we’re on track to do just that.”

The Defence Secretary gave no detail on how the two operations would overlap. However, he said it would be local forces that would capture Raqqa.

French President Francois Hollande told coalition leaders that many jihadists would flee from Iraq to Raqqa, as IS lost territory in Mosul and elsewhere in Iraq.

“A certain number of terrorists will go to Raqqa. It would actually be — if Mosul falls — Islamic State’s last stronghold,” he said.

“That is the reason why you have work together so that we can determine the steps of the next operations.

“We have to make sure Daesh is eradicated and destroyed everywhere, and is not able to establish a strong position because every strong position will be a threat for own interests and our own security.”

French Defence Minister Jean-Yves Le Drian added that while focus may be shifting to Raqqa, the operation in Mosul is on schedule to take out one of Islamic State’s major strongholds.

Mr Carter added the Raqqa offensive will require “capable and motivated local forces” to be effective, saying “a lasting defeat of ISIL can’t be achieved by outsiders”.

“It’s true that the next step is Raqqa, but the recovery of Mosul will have a major effect on Daesh in terms of resources, organisation, management and leadership,” he said.

“The effects will be very strong, even if we maintain that this battle will be difficult, it will be long, the city is very important and we are advancing progressively but with respect to the initial plan.”

Iraqi forces are now nine days into their US-backed campaign to recapture the city of Mosul from Islamic State.

The campaign itself could last weeks or months, allowing some leeway in timing.

IS atrocities against civilians

As the fighting intensifies, allegations have surfaced of atrocities by Islamic State militants against civilians.

The United Nations says it has received reports that IS fighters have massacred scores of civilians as they dig in against the coalition and Iraqi-led forces.

In the worst case, Iraqi forces last week discovered the bodies of 70 civilians in houses at Tuloul Naser, a village south of Mosul.

“The bodies had bullet wounds, but it is not known for sure at this point who was responsible for the killings,” said Rupert Colville, the UN Human Rights spokesman.

In another village human rights staff were informed that IS killed 15 civilians and threw their bodies in a river, apparently to spread terror among the other residents.

In the same village last Wednesday, IS reportedly tied six civilians to a vehicle by their hands and dragged them around the village.

Then on Sunday members of IS were reported to have killed 50 former Iraqi police officers they had been holding in a building outside Mosul City.

“We continue to receive reports of depredations, including extrajudicial killings and summary executions against children and women as well as male civilians, by ISIL as Iraqi government forces close in on Mosul,” Mr Colville said.

“We also continue to receive information that reinforces the belief that ISIL are deliberately using civilians as human shields.

“We very much fear that these will not be the last such reports we receive of such barbaric acts by ISIL.”

The UN has also been told of allegations that Kurdish authorities have committed human rights abuses at Kirkuk, a Kurdish city further east.

The UN’s humanitarian coordinator for Iraq, Lise Grande, says it is worried about the fate of 250 Sunni Arabs expelled from Kirkuk after an attack by IS.

“We were informed that after the attack by ISIL two days later the Kirkuk authorities announced that they will be expelling civilian populations and just a few hours after the announcement was made we understand that around 250 civilian families felt they had no choice but to leave,” she said.

“People who are displaced have the right to decide when they return and where they are going to live, they cannot be expelled.”

Kirkuk authorities apparently suspected the Islamic State fighters who carried out the attack were helped by Sunni sleeper cells.

The UN says it has no such evidence, and that the timing of the move suggests it was used as a pretext to force Sunnis out of the city.

Nearly 400,000 Sunni Arabs had taken refuge in Kirkuk in the two years since IS declared its caliphate over much of Iraq and Syria.