You are here: Home / MidEastGulf / US, Russia to hold talks over Syria 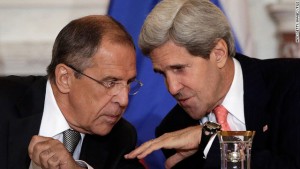 The United States and Russia on Tuesday agreed to reopen talks about how to avoid conflict in the skies over Syria, where both countries are conducting airstrikes.

The Russian Defense Ministry reportedly extended the offer, and the Washington Post quoted Anatoly Antonov, Russia’s deputy defense minister, as saying the talks should not just focus on avoiding mid-air collisions and hostile encounters, but also on a possible Russian partnership in the US-led coalition that has conducted bombing missions against the Islamic State for more than a year.

“We look forward to the formal response from the Russians and learning the details,” the Post quoted Pentagon press secretary Peter Cook as saying in response. “We stand ready to meet again to continue our earlier discussions as soon as possible.”

Until Tuesday, Moscow reportedly ignored US requests to meet and discuss how to avoid conflict following an initial video conference last week that had limited results.

NATO leaders are set to meet in Brussels Thursday to discuss ways in which to respond to the violations, which Russian officials say were accidental.