You are here: Home / MidEastGulf / US, Russia agree to partial truce in Syria 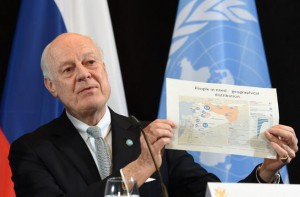 World powers fell short of a full ceasefire in Syria, agreeing to a “nationwide cessation of hostilities” in one week’s time, US Secretary of State John Kerry said early Friday.

The partial truce will not apply to Daesh or al-Nusra Front Islamist militias, he said.

A meeting of the International Syria Support Group in Munich resulted in a further agreement to “accelerate and expand” delivery of humanitarian aid to besieged Syrians as early as Monday, Kerry said.

It foresees the creation of two task forces to separately oversee delivery of humanitarian aid and the cessation of hostilities.

Kerry said that the partial truce could not be referred to as a ceasefire, which would be “far more permanent – an end of conflict.”

It was not immediately clear how the exclusion of al-Nusra Front from the partial end to hostilities would work in practice. On many of Syria’s most active front lines, the group fights alongside other rebel groups.

The diplomats had met to push for a breakthrough ahead of peace talks scheduled to resume February 26 in Geneva.

The top diplomats of Iran and Saudi Arabia – rival regional powers considered key to any durable ceasefire and political transition in Syria – attended the talks. It was their first meeting since the countries broke off diplomatic relations in early January.

The agreement came against the backdrop of a significant military escalation in Syria, as Syrian President Bashar al-Assad, backed by a Russian air campaign, advances against rebels.