You are here: Home / Africa / US ‘running secret network’ of military bases across Africa 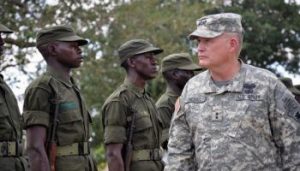 The United States military is allegedly running a network of secret military bases across Africa, new documents have revealed for the first time, like reported by alaraby.co.uk.

The sources’ testimony supports a top-secret document showing the location of 36 AFRICOM bases in 24 African countries that have not been previously disclosed in official reports.

One AFRICOM source said that these bases were used to launch rapid responses to security situations including “increased threats” such as the movement of extremist groups.

The US military base at al-Wigh, located in the Fezzan region of southwest Libya near the Niger border, lies in an area under the control of General Haftar’s Libyan National Army (LNA).

The Libyan military sources, who chose to remain anonymous for professional reasons, said the existence of al-Wigh airbase pointed towards the LNA’s co-operation with the US military.

The LNA was formed in 1988 to overthrow Gaddafi without success and Haftar was forced into exile in North Virginia, allegedly under CIA’s employment for the next 20 years, prior to his return to Libya in 2011.

The Washington Post reports he lived in two Virginian towns, Falls Church and Vienna – located only seven miles away from the CIA headquarters.

The documents, obtained by TomDispatch under the United States’ Freedom of Information Act, contradict AFRICOM’s official statements dating back a decade – showing the scale of American military bases around the world.