You are here: Home / Africa / US resumes training of Nigerian troops for anti-terror war 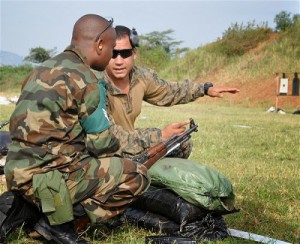 Fourteen months after a U.S. army-led combat training for Nigerian soldiers was aborted, American authorities have announced a resumption of the programme.

The American Assistant Secretary of State for Africa, Linda Thomas-Greenfield, said, Tuesday, that the training would resume this February.

Speaking on U.S. strategy against Boko Haram at a meeting in Washington DC, Ms. Thomas-Greenfield said U.S. expects would “inaugurate the first round of training for an infantry battalion later this month.”

The resumed training program is part of a broad U.S. strategy against the terror group and, part of the new deal the Obama administration entered with President Muhammadu Buhari during his official trip to America last July.

“Our counter Boko Haram Strategy is an integrated, interagency effort to help Nigeria and its neighbors in their fight to degrade and ultimately to defeat Boko Haram”, said Ms. Thomas-Greenfield adding that the Obama administration engaged Mr. Buhari’s military leadership “to draw up a range of new and continued security assistance”.

“We have stepped up information-sharing efforts, we are jointly evaluating new efforts to counter improvised explosive devices, developing better tools to assess harm to civilians, and assess the potential for U.S. advisory assistance”, the Assistant Secretary of State said.

One of the reasons the Jonathan administration gave for terminating the previous U.S. training program in December 2014 was America’s reluctance to share real-time intelligence with the Nigerian military and refusal to sell Cobra helicopters to Nigeria.

While Ms. Thomas-Greenfield did not indicate specifically if real-time intelligence sharing and sale of military equipment are part of the deal with the Buhari administration, she said the U.S. had already sent 90 combat personnel and was committed to sending a total of 300 soldiers to support “the governments of Cameroon, Chad, Niger, and Nigeria by providing airborne intelligence, surveillance, and reconnaissance operations that help our African partners degrade and defeat Boko Haram”.

In apparent reference to Amnesty International’s recent report on alleged war crimes committed by Nigerian soldiers, Ms. Thomas-Greenfield cautioned that the fight against Boko Haram goes beyond the battlefield.

“Equipment and training are only useful when employed by professional forces that respect human rights and earn the respect of the population, our bilateral security discussions will continue to be paired with discussions regarding human rights”, she said, adding that “Nigeria and Lake Chad Basin countries must address the drivers of extremism that gave rise to Boko Haram, these drivers include weak, ineffective governance, corruption, lack of education, and lack of economic opportunities and jobs for the burgeoning young population”.

The previous training programme, which started in April 2014, engaged American soldiers and special operators as instructors for a 650-strong Nigerian ranger battalion to fight Boko Haram.

Itwas the first time ever that US troops would train their African counterparts for a mission other than peacekeeping.

Ms. Thomas-Greenfield was one of three lead speakers at the Tuesday meeting on regional impact of Boko Haram. It was hosted by Congresswoman Karen Bass with diplomats and diaspora Nigerians in attendance.