You are here: Home / Senza categoria / US presses NATO allies on counter-Islamic terror 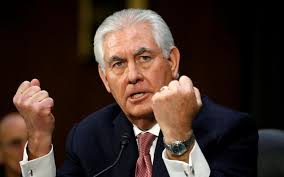 U.S. Secretary of State Rex Tillerson on Friday urged his NATO counterparts to boost their defense budgets and do more to combat extremists in Syria and Iraq, like reported by ap.org.

Meeting with NATO foreign ministers in Brussels for the first time, Tillerson said it’s important to ensure the U.S.-led military alliance “has all of the resources, financial and otherwise, that are necessary for NATO to fulfill its mission.”

After advancing the talks a week to suit Tillerson’s schedule, ministers from Europe and Canada wanted to hear exactly what more Washington expects NATO to do against the Islamic State group.

“We want to discuss how we can build on NATO’s already important involvement in the fight to defeat ISIS and other counter-terrorism actions that NATO can provide, and ultimately bring stability to the Middle East,” Tilllerson told reporters.

NATO has fought insurgents in Afghanistan, and is training Iraqi officers so that local forces can make a strong stand against extremists. There is no appetite to deploy troops in counter-terrorism operations. Allies believe that the international coalition against the Islamic State group should be leading combat operations, not NATO.

NATO Secretary-General Jens Stoltenberg said the lesson learned from operations in Afghanistan, but also Kosovo and Bosnia-Herzegovina, is that “in the long run it is much better to fight terrorism and project stability by training local forces, building local security institutions, instead of NATO deploying a large number of combat troops.”

France’s foreign minister, Jean-Marc Ayrault, insisted that only a political solution can bring peace to Syria and cut extremism off at its roots.

“If we want to defeat terrorism in Syria we don’t just need to defeat Daesh, we also must fight its causes,” he told reporters.

He said the international community must focus on “national rebuilding, the reconciliation of the country, the return of refugees, and it goes through this political process as planned in the U.N. resolution negotiation framework. And on this I am also expecting clarification from the U.S.”.