You are here: Home / West Asia / US out, Taliban ride on violence, situation critical in Afghanistan 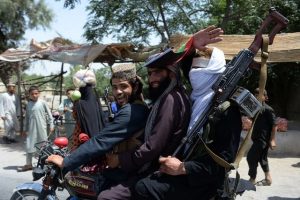 May 2021 was a bloody month in Afghanistan with the strife torn country getting more volatile and politically unstable. Taking advantage of the commencement of the final drawdown of the US-led international forces, the ultra-conservative Sunni Taliban have intensified its efforts to capture more areas with its ties with Al-Qaeda intact and the so-called Islamic State Khorasan Province acting in harmony with the Islamist forces, like reported by hindustantimes.com.

The disruptive role of Pakistani deep state is adding fuel to the fire with Islamabad continuing its support to Taliban’s terror tactics. The peace process has failed to deliver any positive outcomes and has little or no hope of doing so in future. The chaos and uncertainty in Afghanistan is likely to worsen further and also impact regional peace in the Indian sub-continent as the terror factories will go full steam after September 2021 after the American and international troops leave the country. This will bring an end to two decades of peace-keeping efforts in the region.

By September 11, 2,500 troops of the United States will be completely out of Afghanistan and around 7,000 non-US forces from mainly NATO countries – along with Australia, New Zealand and Georgia – are also planning to leave by that date.

Since the announcement of the withdrawal of US forces, violence has been rising and efforts to broker a peace settlement between the Afghan government and insurgent Taliban have slowed.

The rise in violence

There has been an over two-and-half fold increase in terrorism-linked fatalities in the country in May in comparison to April, 2021. According to government figures, 4,375 such deaths have been reported in Afghanistan as compared to 1,645 in April. This was the highest fatality count recorded in a month since March, 2020.

The security forces too suffered a three-fold surge in fatalities – from 388 in April to 1,134 in May.

The Afghan national defence and security forces, which will take over the efforts to maintain peace in the country after international forces are gone, have suffered disruptions in supply of essentials like ration, shortage of ammunition and witnessed 26 of their bases surrendered to the Taliban last month.

At least 80 people were killed and more than 160 injured in the attack near the Sayed Ul-Shuhada High School in Kabul on May 8. The attack took place as students started to make their way home.

In the beginning of May, Afghan National Security Adviser Hamdullah Mohib hinted that Al-Qaeda was playing a key role in keeping the Taliban’s war machine active in Afghanistan. He also said that both Al-Qaeda and the Islamic State-Khorasan Province were carrying out their activities in harmony with the Taliban.

A week later, First Vice President Amrullah Saleh asserted that the Taliban continued to operate ‘shoulder-to-shoulder’ with Al-Qaeda. Saleh highlighted the elimination of Al-Qaeda elements by Afghan National Defence and security forces to prove his point.

Pakistan continues to play the game

What has been a cause of concern for the Afghan government is the support the terrorists are getting from neighbour Pakistan. One of the provincial governors raised the issue of the presence of Pakistani nationals fighting alongside Taliban militants.

Underlining that the Taliban received weapons and ammunition supplies from Pakistan, Afghan National Security Adviser Hamdullah Mohib termed the outfit as a “slave of the ISI (Inter-Services Intelligence)”.

In an interview on May 15, Afghanistan President Ashraf Ghani reiterated that Pakistan was supporting the Taliban. But Pakistan’s Foreign Office described it as an “irresponsible statement” and a “baseless allegation”.

In a statement, Pakistani Army Chief of Staff General Qamar Javed Bajwa reiterated to President Ghani last month that “a peaceful Afghanistan means a peaceful region in general and a peaceful Pakistan in particular”.

“We will always support ‘Afghan led-Afghan owned’ Peace Process based on mutual consensus of all stakeholders,” the statement said.

President Ashraf Ghani said last month that he has been pushing the formation of an all-party ‘Supreme State Council’ to carry forward the peace process as well as the resistance to the Taliban. Ghani has met a number of leaders on the structure and composition of the council but it has not been constituted yet.

The council was supposed to be formed last year. The efforts have now been expedited, and local reports in Afghanistan say that an 18-member list has been prepared for the Supreme Council.

Against the backdrop of a spurt in violence in the Northern Provinces of Takhar, Baghlan and Daykundi, Tajik leader Ahmad Massoud (son of former mujahideen leader Ahmad Shah Massoud) stated in Kabul on May 5, that if the Taliban continued to seek a military solution, the Afghan mujahideen groups would be prepared for a confrontation with the outfit. Massoud also underscored that, given the foreign troop withdrawal, the Taliban had no justification for war.

Hazara leader Mohammad Karim Khalili, anticipating a deterioration of the security situation in the Hazarajat area (Bamyan, Daykundi, Ghor, Uruzgan and Wardak Provinces), was making efforts to prepare resistance militias against the Taliban. With the resistance to Taliban rising in erstwhile Northern Alliance areas, Afghanistan seems headed for another round of bloody civil strife with innocents the only victims.