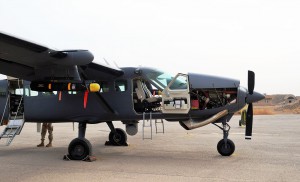 Karidjo spoke as he took possession of two Cessna C-208 planes equipped with intelligence and reconnaissance systems, as well as around 30 military vehicles and ambulances. A US official said the aid was worth around 32 million euros.

Wednesday’s attack took place in the Diffa region, said private radio station Anfani, the scene of several such incidents since February, including one in June in which 38 people were killed.

“It’s not tanks we need but intelligence to fight them,” said Karidjo.

Niger is under threat from jihadist fighters along its northern borders with Mali and Libya, and from Boko Haram extremists along its southeast border with Nigeria.

In October it struck a military cooperation deal with the United States that provides for US training to Niger troops as part of a joint fight against terrorism.

Washington has a military base in Niger used by its drones to supply intelligence to French troops who launched an anti-Islamist operation in Mali in January 2013.

Niger, a vast arid country whose primary source of foreign income is uranium, has joined a regional military alliance alongside Cameroon, Chad and Nigeria, to fight Nigeria-based Boko Haram.