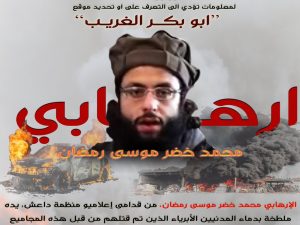 The US State Department is intensifying its search for high-ranking members of ISIS, offering a $3 million reward for information leading to the location or identification of the terrorist group’s media chief, like reported by thenational.ae.

Mohammed Khadir Musa Ramadan, also known as Abu Bakr Al Gharib, is from Jordan and is a senior leader and key propagandist for ISIS.

“Ramadan has played a key role in ISIS’s propaganda operations to radicalise, recruit and incite individuals around the globe. He has overseen the planning, co-ordination and production of numerous propaganda videos, publications and online platforms that included brutal and cruel scenes of torture and mass execution of innocent civilians,” the state department said in a statement released on Thursday.

It said Ramadan is one of the group’s “longest-serving senior media officials” and that he “oversees the group’s daily media operations, including the management of content from ISIS’s dispersed global network of supporters”.

The US, which heads the Global Coalition to Defeat ISIS, has stepped up its hunt for the group’s senior figures since its former leader, Abu Bakr Al Baghdadi, was killed in a US operation in north-west Syria in October, despite Washington pulling American troops out of the country the same month.

Officials said shortly afterwards that the US wanted to bolster the fight against ISIS in northeastern Syria.

Last week, Mutaz Numan Abd Nayif Najm Al Jaburi, who is believed to be among the top ISIS leaders, was killed in a coalition air strike in Deir Ezzor, eastern Syria. The US had put a $5 million bounty on his head, and the operation was aided by the Syrian Democratic Forces.

The State Department has a “rewards for justice” bounty fund of hundreds of millions of dollars for the capture of 44 terrorists viewed as posing the gravest threat to security.

Ayman Al Zawahiri, the leader of Al Qaeda and a former leader of the Egyptian arm of Islamic Jihad, tops the current most wanted list with a reward of up to $25 million.

In March, two US service members were killed in Iraq while advising Iraqi Security Forces on a mission against ISIS.