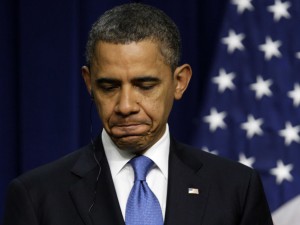 US President Barack Obama’s strategy in the war against Daesh has failed miserably and the best way to defeat the organisation is through a traditional ground war, American newspaper National Interest said.

The paper, which covers international affairs, questioned whether Obama’s strategy was still viable a year after the militant group took control of large areas of Iraq and Syria despite the international coalition’s airstrikes.

It said the war against Daesh was not being undertaken to restore order, security and democracy in Iraq and Syria; but to neutralise the militants who are harming American interests.

The Obama administration insists that airstrikes are sufficient to combat Daesh and that it does not need to send ground troops. However, since airstrikes began, Daesh has been able to extend its control over new areas and acquired the military means to wage a brutal war which shows no signs of calming.

The paper said that it is clear now that despite Obama’s strategy, civil wars and conflicts have spread to larger areas which suggests that the US counterterrorism policies are outdated and that the “enemies have armies that could only be defeated through traditional war and not airstrikes alone”.