You are here: Home / Africa / US Navy seizes weapons off Horn of Africa 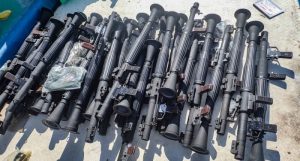 The United States Defense Department has announced that the guided-missile destroyer USS Winston S. Churchill intercepted and seized a large shipment of weapons aboard two dhows during maritime security operations in the Indian Ocean off the coast of Somalia.

Other components taken included barrels, stocks, optical scopes, and other weapon systems.“We are proud of the combined efforts of the AIT and Churchill crew members for executing dynamic and demanding boardings,” said Lt. Travis Dopp, Assistant Advanced Interdiction Team Leader aboard Churchill, and added, “We are proud to have a positive impact on the safety and security of coalition forces by interdicting shipments of lethal aid.”

According to the US military, the source of the weapons and their intended recipients is currently unknown.

Somalia is in a tense political period whereby the incumbent President, Mr. Mohamed Abdillahi Farmajo’s term ended in February and so far no date has been set for elections due to disagreements between the Federal Government and member states. Jubaland, and Puntland, and opposition candidates have stated that they no longer recognize Mr. Farmajo as President.

Efforts by the international community to broker a deal between the parties have failed.

So far, the Federal Government has insisted through various spokesmen that it is still legitimate despite its mandate ending on February 8th.

It is unclear if the seized weapons belong to various factions facing off in Somalia or possibly the Al-Shabaab terror network which has been resurgent in the Horn of Africa due to the political turmoil in Somalia.