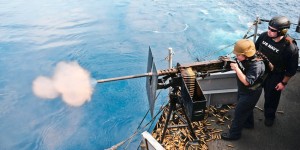 The US Navy fired three warning shots at four Iranian boats after they closed in at speed on Sunday, say defence officials.

It happened in the Strait of Hormuz after they did not respond to request by the USS Mahan to slow down.

The destroyer fired flares and a helicopter dropped a smoke float but the boats carried on at speed, according to the officials, who were speaking anonymously to Reuters.

The Islamic Revolutionary Guard vessels came to within 800m of the Mahan, which was escorting two other US ships.