You are here: Home / MidEastGulf / US mulls new Syria options 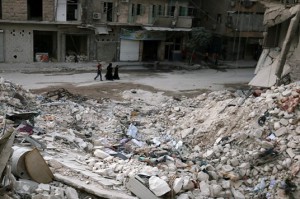 The United States is on the verge of ending its Syria diplomacy with Russia and is looking at new options on how it might seek to end the 5-1/2 civil war, US officials said.

The US officials said the failure of diplomacy in Syria has left the Obama administration no choice but to consider alternatives, most of which involve some use of force and have been examined before but held in abeyance.

“The president has asked all of the agencies to put forward options, some familiar, some new, that we are very actively reviewing,” Deputy Secretary of State Antony Blinken told lawmakers yesterday, without giving details.

He said officials would “work through these in the days ahead.”
Speaking to the Senate Foreign Relations Committee, Blinken said “all of the outside patrons are going to throw in more and more weaponry against Russia.

Russia will be left propping up (President Bashar al-)Assad in an ever smaller piece of Syria.”
Separately, two US officials said the United States was expected to inform Russia it was suspending their diplomatic contacts on Syria given the collapse a jointly brokered truce on September 19 and the latest violence in Aleppo.

The last week of bombing has killed hundreds of people and wounded hundreds more, with no way to bring in medical supplies.

There are only around 30 doctors inside the besieged rebel held sector of Aleppo, and the two biggest hospitals were knocked out of service by air strikes or shelling on Wednesday.
“We are on the verge of suspending the discussion,” US Secretary of State John Kerry said at a public policy discussion in Washington.

“It is one of those moments where we’re going to have to pursue other alternatives for a period of time.”
A US official who spoke on condition of anonymity said that the new discussions on options were taking place at “staff level,” and had yet to produce any recommendations to Obama, who has resisted ordering military action against Assad.

Moscow and Damascus launched an assault to recapture the rebel-held sector of Aleppo this month, abandoning a new ceasefire a week after it took effect to embark on what could be the biggest battle of a civil war that began in 2011.

“Kerry and the White House basically bet everything on the diplomatic track on the assumption that Putin didn’t want Russia trapped in another Afghanistan and would seek a way to avoid that,” said an official privy to the administration discussions.