You are here: Home / Africa / US moves to end crisis in Burundi 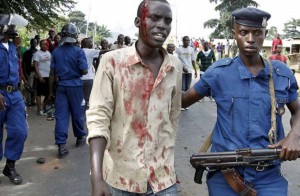 The U.S. Special Envoy for the Great Lakes of Africa, Mr Thomas Perriello, would be visiting Burundi as part of his government’s efforts at ending crisis in the country.

The African Media Hub of the U.S. Department of State said in a statement that the Envoy would be visiting crisis-ridden Burundi, as well as Brussels, Belgium, Rome and Italy.

According to the statement, the trip is focused on supporting regional efforts to resolve crisis in Burundi, as well as support upcoming elections in the DRC.

“The U.S. Government strongly supports the regionally-mediated Burundian dialogue relaunched on Dec. 28, 2015, and is urging all stakeholders to remain committed to the process without preconditions.

“An inclusive dialogue remains the best route for peacefully resolving the crisis in Burundi and restoring the stability achieved by the Arusha Agreement.

“The Special Envoy will engage with Burundian stakeholders and the East African Community (EAC) leadership about next steps for advancing the dialogue, including moving the dialogue to Arusha, Tanzania,’’ it said.

The statement also reiterated the U.S. government’s commitment to supporting the DRC in holding her “elections as per the constitution.”

It said that the Envoy would meet with Congolese stakeholders to discuss next steps in the electoral process and the importance of respecting human rights during and after the elections.

The statement also said that Perriello’s visit would culminate in Addis-Ababa, where he would join the U.S. delegation to the African Union Summit.