You are here: Home / MidEastGulf / US military strikes Daesh in Iraqi Mosul 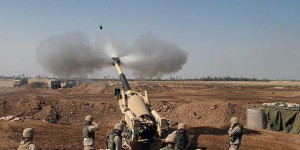 The U.S. military deployed to the east of Iraq’s Mosul has started shelling Daesh targets as part of an operation to retake the city, a Peshmerga commander said.

“The Daesh terrorists started burning tires to block the view of the warplanes after international coalition forces struck the area,” he added.

“Daesh terrorists also started burning the petroleum filled in their ditches, which they have dug around the city.”

But a Pentagon official who wanted to remain anonymous told Anadolu Agency that “a full scale offensive hasn’t started yet”. The official did not confirm if the operation had begun at all.

On the other hand, the U.S. Central Command (CENTCOM) told Anadolu Agency that reports on social media and the Internet that Mosul operation began were “erroneous.”

The CENTCOM official who also wanted to remain anonymous said the liberation of Mosul was an “Iraqi military plan” and would start whenever Baghdad wanted to kick it off.

In mid-2014, the Daesh group captured the northern city of Mosul and overran vast swathes of territory in northern and western Iraq. The militant group remains in control of several parts of the country, including Mosul.

The Iraqi army and its allies are now gradually advancing on Mosul, which officials in Baghdad have vowed to “liberate” by year’s end.