You are here: Home / Africa / US military mission in Niger and Algeria looks set to enter an entirely new phase 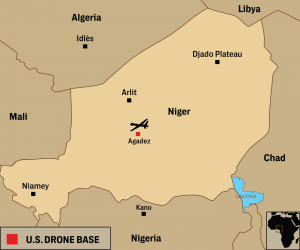 The United States now reportedly has permission to fly armed drones in support of its operations in the west African country of Niger, but it remains unclear if it has done so, or if it even has the capability to do so, yet. Satellite imagery and planned fuel purchases do indicate increased U.S. military activity in the country, and potentially in neighboring Algeria, even before a deadly ambush near the village of Tongo Tongo that resulted in the deaths of four American troops, like reported by thedrive.com.

On Nov. 30, 2017, The New York Times reported that U.S. and Nigerien authorities had reached an understanding regarding the use of armed unmanned aircraft inside the country, citing anonymous officials and an official memorandum. Unnamed sources subsequently gave similar details to other outlets. According to Reuters, the United States had not made use of the new agreement at that time, and it was unclear who would have to approve any such strike. At the time of writing, U.S. Africa Command (AFRICOM) had not yet responded to The War Zone’s query about whether drones were now flying armed missions over Niger.

The memo The Times obtained said that the American facilities adjacent to the Nigerien Air Force’s Base Aérienne 101, attached to Diori Hamani International Airport in the country’s capital Niamey, would host the new armed flights. Since 2013, the U.S. Air Force’s 324th Expeditionary Reconnaissance Squadron has flown MQ-9 Reapers from the base, but for surveillance missions without any weapons. One publicly available image, seen at the top of this story, shows a drone with a drop tank for extended range under one wing and an empty pylon under the other.

American and Nigerien officials had reportedly been working on the new arrangement for months, but both parties moved to finish the deal after a deadly ambush by suspected terrorists from the Islamic State in the Greater Sahara, or ISGS, close the Niger-Mali border led to the deaths of four U.S. Army soldiers between Oct. 4 and 6, 2017.

Satellite imagery from DigitalGlobe, provided through Google Earth, shows significant unmanned aircraft activity in Niamey even before then. The most recent image, dated Sept. 9, 2017, caught no less than three Reapers outside of their clam shell hangars, including one on the taxiway leading to Diori Hamani’s main runway.

It’s not clear whether or not all three aircraft belong to the 324th, though. France flies its own Reapers from facilities next to the American base. Before October 2017, the French had secured the right to fly armed missions from Niamey with their drones, as well as Mirage 2000D fighter jets. The Satellite imagery also shows French and German C-160 Transall transports and a French KC-135FR tanker at the base, all of which are supporting those countries counter-terrorism and security assistance efforts in the region.

A Reaper flying from the base was reportedly overhead during the Tongo Tongo within minutes of American commanders receiving a request for additional support from the embattled troops, followed by French Mirages and helicopters. Earlier in December 2017, BuzzFeed News reported that the American personnel and their Nigerien partners had in fact crossed the border briefly into Mali to hunt for specific militants during the operation, citing various named and unnamed Nigerien officials.

U.S. military personnel, and private contractors supporting their missions can “be temporarily present in the Republic of Niger in connection with visits, training, exercises, and humanitarian activities, and other activities as mutually agreed,” according to the 2013 Status of Forces Agreement. The combined force then found itself ambushed as it made its way back to a forward base in the city of Ouallam, which effectively lies halfway between Tongo Tongo and Niamey.

The new details only raised new questions about the nature of and planning for the supposedly “low risk” mission, the resources available to American forces in the region, and oversight of those activities. It remains unclear whether or not the unit was even suitably equipped for that task and if not, why not? The exact circumstances of the incident remain under investigation.

There are other indications that the United is indeed stepping up its presence in and around Niger in the aftermath of the firefight near Tongo Tongo. “The war is morphing. You’re going to see more actions in Africa, not less,” Senator Lindsey Graham, a South Carolina Republican, had told reporters after meeting with Secretary of Defense James Mattis on Oct. 20, 2017.

On Dec. 1, 2017, the Defense Logistics Agency issued an amendment to a contract notice regarding prepositioned supplies at jet fuel at sites throughout Europe and Africa in support of U.S. military activities. The change specifically added a requirement for supplies of commercial Jet A fuel at three sites: Manu Dayak Airport in the central Nigerien city of Agadez, Houari Boumediene Airport in the Algerian capital Algiers, and Tamanrasset/Aguenar Airport.

Tamanrasset/Aguenar, which is also co-located with an Algerian Air Force Base, is situated in Algeria less than 200 miles from the Nigerien border and within 300 miles of Mali. Terrorists, other militants, and criminal organizations all operate with significant freedom in this sparely inhabited tri-border area.

DLA says it wants fuel to be in place starting in March 2018 and running at least through September 2019. At the time of publishing, AFRICOM had not yet responded to questions about the exact nature of its activities, or those of contractors supporting the command, at Tamanrasset/Aguenar.

But we at The War Zone have already written in detail about how establishing an armed drone mission in Niger would require additional personnel, facilities, and other resources. Commercial jet fuel there could help enable the delivery of the additional equipment and supplies necessary for expanding operations at sites in Niger, as well as elsewhere throughout the region. U.S. conventional military and special operations forces both routinely use contract airlift to support their activities, including covert operations, especially across Africa.

Most notably, the United States is planning to eventually move the entire Nigerien drone operation, armed or otherwise, to an all-new facility near the city of Agadez to the northeast of Niamey. Since at least 2015, the U.S. Air Force conducts operations there from a compound attached to the Nigerien Air Force’s Base Aérienne 201, with both parties making use Manu Dayak Airport’s single runway.

The foreboding conditions in the region have delayed construction of the new base and we don’t know the extent of American operations there at present. However, a picture from October 2017 does show a clam shell hangar, commonly associated with unmanned aircraft operations.

The U.S. military has acknowledged that foreboding conditions in the region has delayed construction of the new base. The United States officially hopes to get things fully up and running some time in 2018.

Given the present circumstances, this could now coincide with an expanding American military presence elsewhere in Niger, or in neighboring countries, such as Algeria.