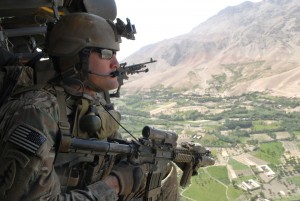 Commandos from the US-led coalition battling the terror group known as Islamic State (IS) have raided a village held by militants in eastern Syria, according to forces.tv .

US Central Command told AFP that “an operation was conducted in that area”, but declined to give further details.

At least 25 jihadists were killed in the two-hour raid, the Syrian Observatory for Human Rights monitor said.

“Four helicopters from the international coalition yesterday [Sunday] at noon carried out a commando raid on Al-Kubar village in western Deir Ezzor province.”

The oil-rich eastern province, which borders Iraq, is almost totally under IS control and has been regularly targeted by US-led forces.

Coalition forces targeted a bus carrying 14 IS fighters, killing them all, according to Abdel Rahman.

They also targeted an IS-controlled water facility in the village, killing at least 11 IS fighters in a firefight.

A commander of the SDF, a US-backed coalition of Arab and Kurdish forces, confirmed the raid on the village, 40 kilometres (25 miles) from Deir Ezzor city.

The attack targeted vehicles driven by senior IS fighters coming from Raqqa, killing several and capturing others, he added.

A Syrian Army official said military radars had detected the operation but could not identify the nationality of the aircraft.

The US has been leading a campaign against IS in Syria since September 2014.

Since early 2015 jihadists have besieged the provincial capital, also called Deir Ezzor, home to some 200,000 people.

IS controls around 60% of the city, the rest of which is held by forces loyal to Syrian President Bashar al-Assad.