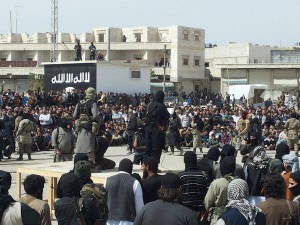 The US-led coalition has announced a new military operation in northern Syria aimed at isolating Raqqa city, an Islamic State (ISIS) stronghold. According to US Defense Secretary Ashton Carter, the coalition has started “laying the groundwork” for the operation.

Carter met with ministers from 12 other countries in Paris on Tuesday. After the meeting, he told reporters that the coalition was activating the rumored operation. “Our partners are to commence the isolation of Raqqa,” Carter said, in reference to the pro-Kurdish Syrian Democratic Forces (SDF) and other allied factions.

The US-led coalition has simultaneously activated several remote fronts, forcing ISIS to stretch its limited forces. US Lieutenant General Sean MacFarland said in August that ISIS had dwindled to between 15,000 and 20,000 militants. Other estimates have been significantly higher.

Coalition-backed Kurdish Peshmerga and Iraqi Army soldiers, are now in the second week of a military operation, which aims to oust ISIS from Mosul city. The Raqqa operation, would force ISIS to prioritize deployments in Iraq or Syria. “There will be some simultaneity to these two operations [in Mosul and Raqqa],” the Carter said earlier on Sunday.

According to eyewitnesses and activists, the extremist group has imposed a curfew in the city centre, installed new checkpoints and erected concrete road blocks. There has also been a two-week-long state of alert amongst ISIS jihadists.

Apparently, those security measures, will now be tested. Carter declared: “Today we resolved to follow through with the same sense of urgency [as in Mosul] and focus on enveloping and collapsing ISIS’ control of Raqqa.”