You are here: Home / MidEastGulf / US-led coalition closes in on Daesh in Syria’s Raqqa 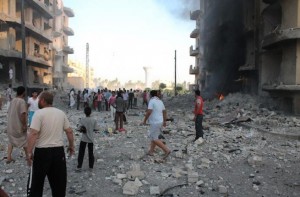 The US-backed campaign against Daesh is closing in on Raqqa, the Syrian capital of the group’s self-proclaimed caliphate, like reported by albawaba.com.

The offensive is being waged by the Syrian Democratic Forces (SDF) who say that under President Donald Trump they have seen signs of increased American support.

They aim to fully encircle Raqqa, severing it from Daesh strongholds in Deir Ezzor where tens of thousands of civilians are trapped by the militants.

Air drops of food by the UN’s World Food Programme, halted in mid January, have resumed, adding to those carried out since last spring.

“We have done a total now of 179,” WFP Spokeswoman Bettina Luescher told a news conference in Geneva.

“We restarted them on Sunday and we are glad that we can continue to bring life-saving food and other aid supplies to this besieged town.”

There is also a desperate need in eastern Aleppo where civilians have been returning to what remains of their homes.

The WFP has stepped up its help there too, providing hot meals and other rations to families trying to rebuild their lives.