You are here: Home / Africa / US launches Somalia strike after troops come under attack 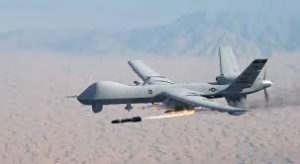 U.S. forces in Somalia came under attack earlier this week, prompting a defensive air strike against a militant group aligned with al-Qaida, U.S. Africa Command said according to stripes.com.

It said that U.S. troops were on a mission on Tuesday with Somali partner forces about 40 miles west of Mogadishu when they came under attack. No U.S. military personnel were injured in the clash, but one member of the partner force was killed and two others were injured.

“The U.S. airstrike was conducted against an enemy fighting position in self-defense after U.S. and partner forces came under attack,” AFRICOM said in a statement. Two militants were killed and one was wounded in the strike, the statement said.

The Al-Shabab militant group has waged its insurgency in Somalia since 2006. The militants, who have sworn allegiance to al-Qaida, also have carried out attacks in Kenya, Djibouti and Uganda. The African Union has deployed as many as 22,000 troops and policemen since 2007 to try and help stabilize the nation.
The U.S. military also has provided backing to the AU force with airstrikes and with a limited number of special operations troops who have been rotating through Somalia for several years. They have been working alongside allied forces as front-line advisers.

U.S. special operations troops have been operating in Somalia for several years, working alongside Somali and African Union forces as front-line advisers.

Somalia, home to one of the world’s weakest central governments, is attempting to build up its armed forces at a time when the African Union is preparing to draw down its forces in the country. The African Union force, deployed in Somalia for more than a decade, has played a central role in the battle against the militant group al-Shabab. During the past two years, AFRICOM has increased the pace of airstrikes in the country in an effort to apply pressure on the militants.

“U.S. forces will continue to use all authorized and appropriate measures to protect U.S. citizens and to disable terrorist threats,” AFRICOM said. “This includes partnering with (the African Union’s Somalia mission) and Somali National Security Forces (SNSF) in combined counterterrorism operations and targeting terrorists, their training camps, and their safe havens throughout Somalia and the region.”

While al-Shabab has carried out attacks beyond its borders, in countries like Kenya and Uganda, it has not demonstrated the ability to conduct operations in the West.