You are here: Home / MidEastGulf / US launches secret drone campaign against ISIS in Syria 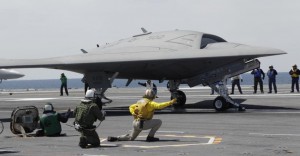 The US has launched a separate and secret drone campaign managed jointly by the CIA and Special Operation Forces in Syria to target the leaders of the dreaded ISIS in Syria, a media report has said.

The drone as part of a targeted killing program that is run separately from the broader US military offensive against the IS, The Washington Post reported on Tuesday quoting unnamed US officials.

“The program represents a significant escalation of the CIA’s involvement in the war in Syria, enlisting the agency’s Counterterrorism Center (CTC) against a militant group that many officials believe has eclipsed al-Qaeda as a threat,” the daily reported.

The officials said the program was aimed at terrorism suspects deemed as “high-value targets”. As part of the Syria buildup, the CIA US has pulled drone aircraft and personnel from other regions, including Afghanistan and Pakistan, where the withdrawal of US troops and the reduced pace of the agency’s drone campaign against al-Qaeda have freed up resources, the report said.

The CIA is flying drones only over Syria, not in Iraq, where the Islamic State also has a significant presence, it said.

The secret drone program, officials said, is aimed primarily at leadership figures in the Islamic State as well as operatives suspected of being involved in efforts to build a terrorist network beyond the borders of its declared caliphate, the report said. Al-Qaeda militants also are approved targets, it added.