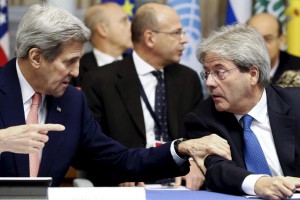 U.S. Secretary of State John Kerry and Italy’s Minister of Foreign Affairs, Paolo Gentilon, along with other United Nations delegates led an international diplomatic effort Sunday to get Libya’s warring political groups to sign a deal to form a unity government. The agreement, if passed, would allow Western powers to assist Libya’s fight against Islamic State group’s growing presence in the country.

The U.N. pact hopes to unify Libya’s two rival governments and armed factions after the North African state plunged into chaos four years after rebellion ousted Moammar Gadhafi. However, hardliners on both sides have been resisting the deal as the Dec. 16 deadline to sign the agreement draws close.

A senior State Department official, speaking on condition of anonymity, told Reuters that the one-day meeting would endorse the Libyan agreement, hoping it would give Libyans confidence to move ahead, knowing they had the support of the international community.

“Libyans wanted to know that if they took this step the international community would support them on it,” the official told reporters.

However, past deadlines have slipped by as political differences between anti-Gadhafi rebels have split the Libyan capital Tripoli, in two. For more than a year, the west side of Tripoli has been controlled by an armed coalition called Libya Dawn with its own self styled government, while the U.N. recognized government operates out of the east side of the city. Both factions are backed by loose alliances of former rebel brigades, tribal fighters and former Gaddafi soldiers.

“There was a wide consensus that only through rapid signature of the Libyan political agreement the country can be brought back to unity,” U.N. Libya envoy Martin Kobler said in Tunisia after two days of talks.

According to media reports, the international community is hoping to unify the two rival governments so as to build and train a national army and contain ISIS’ rising influence in the region. The extremist group took over the city of Sirte earlier this year, destroying oil fields and military checkpoints. ISIS also released a video, showing the beheading of 21 Egyptian Christians on a Libyan beach.