You are here: Home / Mediterranean / US, Israel move to broaden UNIFIL powers in Lebanon

As the UN Security Council prepares to discuss renewing mandate of peacekeeping force in southern Lebanon , Israel and the US launch fresh initiative to grant UNIFIL greater powers and responsibilities to monitor Hezbollah 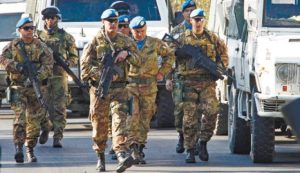 Israel and the US are gearing up to launch a new initiative aimed at expanding the powers and responsibilities assigned to the United Nations Interim Force in Lebanon (UNIFIL) in its monitoring of Hezbollah, as the UN Security Council prepares to discuss this week the renewal of its mandate, like reported by ynetnews.com.

Ahead of the discussions, Israel’s ambassador to the United Nations, Danny Danon, derided what he described as UNIFIL’s inaction as Hezbollah continues growing in strength. “Hezbollah is only increasing its power, while UNIFIL sticks its head in the sand,” the ambassador said.

Danon decried the force’s apparent lackadaisical attitude toward carrying out its intended mission, as Hezbollah terrorists continue to conceal military stockpiles inside civilian populations and dig in inside residential buildings and homes.

“Hezbollah has been breaching UN Security Council resolutions on a regular basis and using civilian homes as military bases,” Danon said. “The UN can no longer stand by and let this happen. It’s time for UNIFIL to fulfill its intended task of bringing stability to the region.”

Israel and the US, wholly dissatisfied with the nature of UNIFIL’s actions which have not sufficed in preventing repeated violations by Hezbollah of Security Council resolutions, are working behind the scenes to change its mandate which would go into effect at the end of the month, in a way intended to transform the way it operates against Hezbollah.

In light of these events, Ambassador Danon communicated a list of Israeli demands to Security Council member states, delineating practical changes that needed to be taken in UNIFIL’s operational functioning.

These demands include permitting entry into villages in areas controlled by Hezbollah, a measure UNIFIL has avoided thus far, a significant increase in military patrols and active checks on the ground, as opposed to merely reporting to the Lebanese army, and real-time reports to the Security Council on violations of decision 1701 (the Israeli-Hezbollah ceasefire at the end of the 2006 conflict).

Firmly throwing its weights behind the move, the United States declared during these behind-the-scenes talks it won’t tolerate the Security Council “serving as a rubber stamp for UNIFIL’s futile reports.”

Concurrently, Israel sent chief army officers to the UN building in New York this week to brief Security Council delegates on the severity of the threat Hezbollah poses and the transformation of the organization into a state-like power.

Later that day Guterres will be attending a special event on Israeli innovation in the Israel Museum.

On Tuesday the Secretary-General will visit the Palestinian Authority in Ramallah and meet with representatives of the Palestinian leadership. On Wednesday he’ll fly over Israel for an overhead view, tour the Gaza border communities and the Gaza Strip itself, before later speaking at The Museum of the Jewish People at Beit Hatfutsot in Tel Aviv.

Ambassador Danon welcomed the Secretary-General’s visit, saying, “Especially in light of the attempts to harm Israel on the UN stage, we expect the Secretary-General to present the true face of Israel, its impressive accomplishments and contributions to the world and the complex reality and challenges it faces in the tumultuous Middle East.”