You are here: Home / MidEastGulf / US-Iran alliance for Iraq 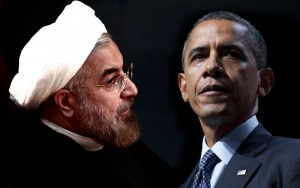 In principle, the Obama administration’s strategy for confronting the Islamic State made perfect sense: The U.S. would conduct military airstrikes against insurgent strongholds in Syria and Iraq in support of coordinated attacks on the ground by troops fielded by our regional allies. The goal was to minimize American combat casualties by avoiding putting U.S. boots on the ground while at the same time drawing our partners in the region into assuming a more robust role in defending against a common enemy.

But as the capture on Sunday of the Iraqi city of Ramadi by Islamic State militants shows, one of the enduring realities of war is that things routinely fail to work out as planned. Ramadi, the provincial capital of Iraq’s Anbar Province, where U.S. forces fought a bloody Sunni insurgency in 2006, was overrun by militants during a lightening offensive that began on Thursday. The U.S.-trained and equipped Iraqi Army and police forces were routed and forced into an ignominious retreat that allowed hundreds of American-supplied vehicles, heavy machine guns, rocket-propelled grenades and other war materiel to fall into enemy hands.

The sudden collapse of Ramadi despite an intensification of U.S. air strikes in recent weeks has eclipsed the Iraqi government’s recent recapture of former dictator Saddam Hussein’s hometown of Tikrit. It also thoroughly dampened the elation in Washington and Baghdad over a U.S. Special Forces operation in Syria over the weekend that killed a high-ranking ISIS leader said to have masterminded the group’s efforts to raise revenue through oil sales on the black market. And it was also an embarrassing reminder that, despite claims to the contrary by the U.S. and Iraqi governments, the group remains a formidable adversary capable of mounting major offensive operations.

According to reports yesterday, ISIS now controls the main roads leading eastward toward the Iraqi capital of Baghdad, and hundreds of government troops who retreated from Ramadi are now trapped west of the city where the militants have them surrounded. The Iraqi government has been unable to resupply them with food or ammunition, and U.S. officials fear a massacre could take place unless reinforcements arrive quickly. The problem is that the Baghdad government has no more Iraqi Army troops to send; they’re all engaged elsewhere.

The only forces available to relieve the besieged Iraqi Army units around Ramadi are Shiite militias backed by Iran. The militias, largely trained and equipped by Tehran and commanded by an Iranian general, played a role in the Iraqi government’s recapture of Tikrit in March. Yesterday, the provincial council in Ramadi, which remains loyal to the government, formally asked Baghdad to send the Shiite militias to their aid, and Iraqi Prime Minister Haider al-Abadi appears to have acceded to the request. But U.S. officials worry the involvement of Shiite militias in the predominantly Sunni enclave of Anbar Province could also touch off a new round of sectarian strife.

Even if that doesn’t happen, the U.S. now finds itself in the awkward position of targeting airstrikes against the Islamic State forces in direct support of fighters fielded by its long-time regional adversary, Iran. There’s more than a little irony in the U.S. becoming, in effect, Iran’s air force in Iraq at the same time it is also engaged in tense talks with Tehran over that country’s disputed nuclear program. The appearance of a de facto alliance between Washington and Tehran in Iraq turns the Obama administration’s stated policy of working with friendly states in the region practically on its head. No wonder Saudi Arabia and the Gulf states are uneasy about seeing their most reliable ally partnering with their most dangerous enemy.

In truth, the U.S. has little choice but to cooperate with Iran if it wants to maintain any influence at all with the Iraqi government in Baghdad, which has its back to the wall in the face of the ISIS threat and is willing to accept help wherever it can get it. Iran has demonstrably increased its influence in Iraq since last year, when the Islamic State began its rampage across the region. The U.S. and Iran both have a powerful interest in seeing the group’s gains reversed.

Just last week, for example, U.S. officials warned that Islamic State may soon seek to organize, or at least inspire, terrorist attacks against the U.S. homeland itself. That’s certainly reason enough to do whatever is necessary to prevent the group from strengthening its grip on the resources needed to carry out such a strike, including adjusting who we’re willing to work with in the region. Politics does indeed make strange bedfellows in one of the most volatile regions on earth. Still, it would be something of an understatement to say that the Obama administration’s strategy for defeating ISIS, which has proven far more resilient than officials expected, is not exactly working out as planned.