You are here: Home / MidEastGulf / US Intelligence: Russia will launch military strikes in Syria 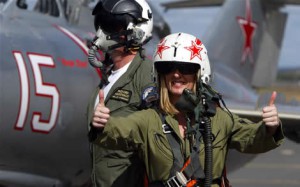 A secret US intelligence assessment predicts that Russia will launch military strikes in Syria to boost the government of President Bashar al-Assad and stop advances by Daesh (ISIL) terrorists.

The intelligence, provided to the White House, says the airstrikes would be carried out by Russian fighter jets that were flown to Syria over the last week, The Los Angeles Times reports.

US officials said Russia moved warplanes to a base near the coastal city of Latakia last week. Russia has also stationed T-90 tanks there, and has increased the number of its military flights to the same airfield.

US officials claimed the Russian warplanes turned off their transponders to avoid detection.

The deployment has raised concerns in Washington that Moscow seeks to establish a military outpost in Syria in support of the government in Damascus.

Russia’s commitment to the Syrian government runs counter to current US policy, which calls for the ouster of President Assad.

The drones fly daily missions above Latakia, Hama, and Idlib, according to the intelligence assessment.

While there has been no follow-up contact since last Friday, Pentagon officials are monitoring the Russian buildup very closely.

US President Barack Obama will push Syria strategy with Russian President Vladimir Putin on the sidelines of the United Nations General Assembly on Monday.

The talks, the first between the two leaders in two years, carry potentially far-reaching implications for the US-Russian relations, which have been severely strained over the crises in Ukraine and Syria.

“It could potentially lay the groundwork for better coordination” in Syria, White House Press Secretary Josh Earnest said of the meeting. “It’s a proposition worth testing.”

Syria has been gripped by deadly violence since March 2011. The United States and its regional allies – especially Qatar, Saudi Arabia and Turkey – have been supporting the militants operating inside Syria since the beginning of the crisis.

As Russia steps up its role in Syria, the Obama administration’s strategy has come under scrutiny.

The Pentagon has admitted that a group of US-trained “moderate” militants in Syria has handed over arms and equipment to an al-Qaeda-linked group in the country.

US Central Command said on Friday night that the items were surrendered to the al-Nusra Front in exchange for safe passage within the region, the Associated Press reported. It said the items amount to 25 percent of the equipment assigned to the group.

Congress approved a $500 million program late last year to “train and equip” more than 5,000 militants to fight in Syria. The scheme, however, has yielded only a handful of militants, US defense officials said.