You are here: Home / Africa / US indicates intent to bolster military ties with Nigeria 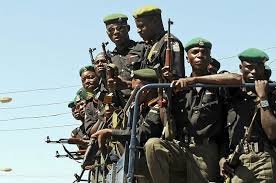 Washington said it is ready to develop military cooperation with Nigeria as the country’s new President Muhammadu Buhari was sworn in.

The US has indicated its readiness to widen military collaboration with Nigeria, especially with respect to the fight against the Islamist group Boko Haram; the move came as the inauguration of Nigeria’s new President Muhammadu Buhari took place in the capital Abuja, sources said.The American delegation at the ceremony was headed by Secretary of State John Kerry, who met Buhari on Friday to discuss the US-Nigeria cooperation against Boko Haram.

Speaking on condition of anonymity, a senior State Department official, in turn, said that sending advisers could be part of this cooperation.

“Something we can do quickly is to send advisers. It could be related to intelligence; it could be something very simple, related to things like logistics,” the official was quoted by the New York Times as saying.

The White House’s military cooperation with Nigeria almost came to a standstill during the presidency of Goodluck Jonathan, who blamed Washington for meddling in Nigeria’s domestic affairs; the US, for its part, berated Nigeria for its alleged human rights violations and corruption in the country’s army.

A chill in ties was especially seen in January 2015, when the Pentagon made it plain that it would rather cooperate with security officials in Cameroon, Chad and Niger in their attempt to contain Boko Haram, which abducted approximately 300 girls from the Nigerian town of Chibok in April 2014 and continues to terrorize the country’s northeast.
“There was a strain in our relationship, particularly with the army on military cooperation, and we have every indication that we’ll be able to start a new chapter,” the State Department official said.Meanwhile, Buhari has pledged to continue combatting Boko Haram until it is “completely subdued.” More than 13,000 people have reportedly been killed by Boko Haram in the insurgency since 2009; about 1.5 million more have been displaced.