You are here: Home / MidEastGulf / US in major weapons sale to Saudis to compensate for Iran nuclear deal 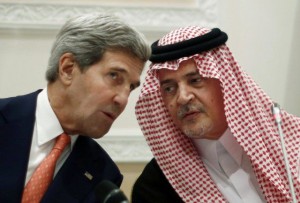 US Secretary of State John Kerry was in Doha, Qatar, on Monday, visiting the foreign ministers of the six-nation Gulf Cooperation Council (GCC). The GCC members are extremely anxious over the nuclear deal with Iran. As I wrote last month in “19-Jul-15 World View — Behind the scenes in the Iran nuclear deal”, the Iran nuclear deal is forcing yet another realignment in the Arab world, as it deteriorates into war.

Kerry on Monday told the GCC ministers that the United States had “agreed to expedite certain arms sales that are needed and that have taken too long in the past.”

The arms sales that Kerry referred to were announced earlier this week. A $5.4 billion weapons deal involves the sale of PAC-3 Missiles as part of the upgrade of the Royal Saudi Air Defense Force. An additional $500 million sale includes ammunition, tracers, artillery shells and mines. Some of these weapons will resupply Saudi’s military in Yemen, where the Saudis are fighting a proxy war with Iran.

And so, with the Mideast deteriorating into war, the Iranians will receive billions in sanction relief to purchase weapons, while the Saudis are going to receive US weapons. There is now apparently a major arms race going on between the Arabs and Iran.