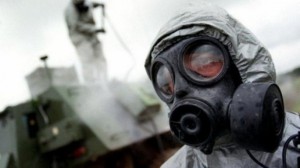 There is a growing belief within the US government that the Islamic State militant group is making and using crude chemical weapons in Iraq and Syria, a US official told the BBC.

The US has identified at least four occasions on both sides of the Iraq-Syria border where IS has used mustard agents, the official said.

The official said the chemical was being used in powder form. The US believes the group has a cell dedicated to building these weapons.

“They’re using mustard,” the individual said of IS. “We know they are.”

The mustard agent was probably being used in powder form and packed into traditional explosives like mortar rounds, the official said.

“We’ve seen them use it on at least four separate occasions on both sides of the border – both Iraq and Syria.”

When these weapons explode the mustard-laced dust blisters those who are exposed to it.

The alternative theories are that IS militants found chemical weapons caches in Iraq or in Syria. It is unlikely that militants found the chemical agent in Iraq, the official said, because the US military would have probably discovered it during the military campaign it waged in the country for about a decade.

The official said that militants were unlikely to have seized the chemical agent from the Syrian regime before the regime was forced to hand over its stockpile under the threat of US air strikes in 2013.

The most likely theory, the official said, was that it was being made using knowledge that is widely available, and pointed out that the mustard agent is not a complex chemical to produce.