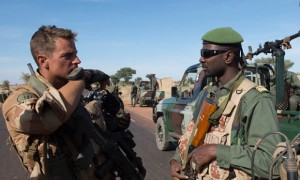 The US and French military are assisting in the search for a Romanian mineworker kidnapped in Burkina Faso and believed to have been taken into Mali, Burkina Faso’s security minister has said to AUNews.

Both the France and US have drones based in Niger, which neighbours Burkina Faso, as part of efforts to combat Islamist extremists in the region.

“Investigations are continuing… with our strategic partners, the French and the Americans, who have in-depth surveillance capabilities,” security minister Auguste Denise Barry told reporters on Tuesday.

Barry also spoke of being in regular contact with the authorities in Mali and Niger on the search.

He said while there had been speculation that the kidnappers had taken the security officer from the mine into Mali before moving into Niger, the site of the abduction was “much closer to the Niger border”.

The security officer was taken on Saturday when five armed men attacked a manganese mine in Tambao, 350 kilometres (220 miles) northeast of the capital, Ouagadougou.

The unidentified gunmen took off in the direction of the nearby border with Mali, according to security officials in both countries.

Kidnappings of foreigners, often for ransom, occasionally occur in Mali and Niger but not usually in Burkina Faso, a landlocked Sahel country.

A Dutch hostage freed by a French raid after being held by Al-Qaeda’s north African arm in Mali for more than three years arrived in the Malian capital Bamako on Tuesday before a planned return to the Netherlands.