You are here: Home / MidEastGulf / US forces raid Islamic State militants in Iraq 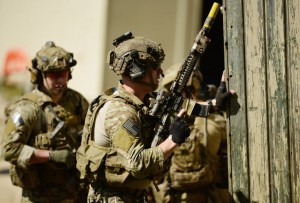 The pre-dawn operation involved a number of U.S. helicopters dropping troops by a building in a village in Tikrit, where forces then captured several IS militants after an hour of sporadic combat, said a source from the provincial operations command on condition of anonymity.

The source said that both the provincial command and military units stationed in the Speicher major airbase, five km east of the targeted village, were briefed by Iraq’s military command about the operation to avoid potential misguided action.

It is not yet known whether the U.S. troops carried out the operation independently or they were aided by the Iraqis, the source said.

The source has no further information regarding any human casualties.

Another source from the Speicher airbase confirmed to Xinhua that they were briefed about the airdrop operation, and said the operation occurred as IS militants attacked Iraqi security forces’ posts from the north to the south of Tikrit.

Earlier, Iraqi and Kurdish sources claimed that in recent weeks U.S. and Iraqi troops jointly conducted several attacks behind IS lines in and around the town of Hawija, however both militaries denied the claim.

Iraq’s security status has deteriorated drastically since June 2014, when bloody clashes erupted between security forces and IS militants.