You are here: Home / Africa / US forces comes under attack in Somalia, kills 18 Shabaab militants 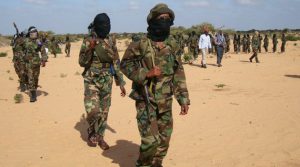 Al Shabaab terrorists in Somalia continue to be weakened, as various forces sustain pressure on the ragtag militants, like reported by capitalfm.co.ke.

Over the weekend, an airstrike by the United States forces killed eighteen terrorists and left many others with injuries.

According to a statement by the US Africa Command, the forces staged the airstrike after they came under attack.

“The U.S. airstrike was conducted against militants after U.S. and partner forces came under attack. We currently assess eighteen terrorists were killed in the strike,” reads the statement.

Two other terrorists were killed by Somali forces “with small arms fire during the engagement.”

The incident happened some 50 kilometres northwest of Kismayo, Lower Juba province, once a stronghold for the terrorists.

According to the statement, no civilian was killed during the incident.

Kenya Defence Forces are part of the more than 20,000 strong African Union Mission to Somalia, helping the troubled country flee itself from decades of terror menace.

“U.S. forces will continue to use all authorized and appropriate measures to protect U.S. citizens and to disable terrorist threats,” they say in a statement.

“This includes partnering with AMISOM and Somali National Security Forces (SNSF) in combined counterterrorism operations and targeting terrorists, their training camps, and their safe havens throughout Somalia and the region.”

Other than Somalia where thousands of civilians have been killed, the region has not been spared either.

Kenya, with a 682 kilometres long porous border, has been a victim of both small and large-scale attacks that have claimed hundreds of lives.

It is 5 years after the Westgate mall attack that left at least 67 people dead with more than 100 others left with serious injuries.

Two years later, on April 2, 2015, the terrorists were to stage another attack this time targeting students at the Garissa University killing 152 died, among them the four attackers.