You are here: Home / Africa / US focusing on Mali in hunt for Niger ambush attackers 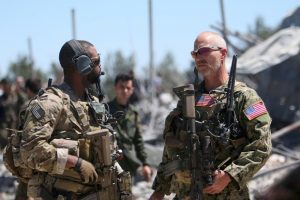 US military and intelligence officials believe that the ISIS fighters that ambushed and killed four US troops in Niger last October fled back across the border into Mali and have remained there since, according to an administration official directly familiar with the latest assessment, like reported by cnn.com.

The official said the US is working with French intelligence and military who operate in Mali to zero in on an exact location in order to potentially target the fighters.
While the efforts to target the fighters continue, CNN has learned that the lengthy US military investigation into the ambush has been completed and approved by US Africa Command and forwarded to Gen. Joseph Dunford, chairman of the Joint Chiefs, and Secretary of Defense James Mattis. Once they both approve it in the coming days, the results will be briefed to the families of the US troops that were killed, members of Congress and the public.
Military and intelligence teams may be able to use a combination of overhead imagery, information from locals on the ground, communications intercepts and social media analysis to attempt to track the ISIS affiliated attackers, the official said.
Any sort of operation to target the fighters would likely to be mounted in partnership with French forces who have thousands of troops in Mali.
Even if the perpetrators are found, there are significant challenges in targeting them officials tell CNN. In that part of the west Africa along the Niger-Mali border, the US would need reconnaissance and intelligence assets — most likely drones to track them closely until they could be targeted either by aircraft or ground troops.
The emergence of a video circulating online that shows the killing of the American troops has added to the sense of urgency.
One defense official who has seen the video says it shows that the US troops fought until the very end against overwhelming odds. Part of the video appears to show the American troops trying to use their vehicles as cover. It also appears to show one of the US soldiers shot at close range. CNN has not viewed that video, but the military has acknowledged its existence and said it is reviewing it.
The US-led team was traveling with 30 Nigerien soldiers when they were attacked by approximately 50 ISIS-affiliated fighters armed with rocket-propelled grenades, mortars and heavy machine guns. During the subsequent gun battle, which lasted for hours, four US soldiers — Staff Sgt. Bryan C. Black, Staff Sgt. Jeremiah W. Johnson, Staff Sgt. Dustin M. Wright and Sgt. La David T. Johnson — were killed and two were wounded.
Five Nigeriens were also killed. US-Nigerien forces managed to kill 20 of the militants during the firefight, a defense official previously told CNN.
One potential complicating factor was the role of the CIA which although not directly involved with the mission, passed along intelligence they had about the terror threat in the region, according to officials. Investigators have tried to determine if the ambushed team had the most up to date intelligence.
The entire episode had an unusual complexity that may have contributed to the team being vulnerable to attack.
As CNN has previously reported there was a second special operations team working more directly for the US intelligence community. That mission was targeting a regional terror planner and coordinator, codenamed “Naylor Road”, according to a senior US military official. The high-value target is also believed to have been involved in attacks in Burkina Faso, the official said.
The ambushed team’s primary mission was to train, advise, and assist a larger Nigerien force of 30 soldiers.
That mission did not change, but while on a standard reconnaissance patrol, the team was given a new task, to advise and assist the Nigerien soldiers so that they could be used as the “quick reaction force” if the other US-Nigerien military team encountered difficulty in a planned operation to capture or kill the targeted leader in the “Naylor Road” mission, three US defense officials told CNN.
Before the capture-or-kill operation was launched, however, US intelligence assets observed the terrorist leader abandon his encampment in Niger and cross the border into Mali.
The mission was then canceled, and the team advising the would-be quick reaction force was given a new task: to go to the abandoned encampment and collect potential intelligence on the terror leader. The officials emphasized that the terrorist leader was known to no longer be at the location, something the US military continues to believe, and the team was tasked only with collecting possible intelligence.
On their way back to their operating base, they stopped in Tongo Tongo in order to enable the Nigerien troops to replenish supplies. While there, US troops met with local leaders as a courtesy. The team felt that the villagers were attempting to delay their departure and may have been complicit in the ambush that followed.
The report into the ambush runs for over 3,000 pages with a detailed summary of more than 100 pages according to military officials. It’s expected to detail several ‘findings” of procedures and processes that may not have been appropriately followed. A second defense official says some of those “process and procedures” for authorizing the mission did not appear to have been properly executed. CNN has learned some senior Green Beret soldiers involved in planning the mission told investigators they believed they followed the rules as they understood them.
Several senior military commanders have told CNN the Niger mission underscores the fundamental risk for special operations forces in remote area far from their traditional support bases and more senior decision makers.
The fundamental question that needs to be answered remains who authorized the mission, and was all the latest risk information and intelligence considered? Several officials say although no final decision has been made it is possible some personnel may receive administrative punishments for not precisely following the rules when the mission was carried out.