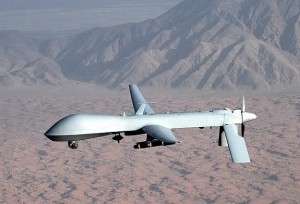 Abdulzai said initial reports indicated the fighters were moving to a new location and that another strike in the same district shortly afterwards left at least 37 militants dead.

“This is the first and bloodiest drone strike on Daesh fighters in the area which has killed quite a big number of militants,” Abdulzai told Anadolu Agency.

He said the fighters were planning to attack rival Taliban militants in neighboring areas.

There have been a string of violent clashes between the two groups, especially in Nangarhar province where self-styled Daesh fighters have managed to push the Taliban out of the Achin and Nazian districts in recent months.

At least 11 militants from both sides were killed and two others wounded when militants loyal to the groups clashed over territory in the province’s Nazian district on Sunday.

Militants claiming loyalty to Daesh have reportedly taken control of parts of five districts in Nangarhar, according to an Afghan official, and established contact with the Daesh leadership in Syria.

The group’s fighters are thought to be former Taliban fighters who have rebranded themselves following the territorial victories won by Daesh in Iraq and Syria in the past year.