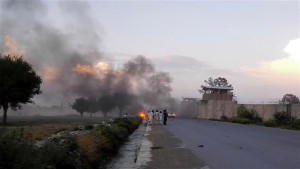 Fifteen Daesh or Islamic State (IS) Militants have been killed and seven others wounded in a US drone strikes in the Haska Mena district of eastern Nangarhar province, an official said on Sunday.

Attaullah Khogyani, the governor’s spokesman said 13 IS rebels were eliminated and seven others wounded in a US drone strike in Paen locality late on Saturday.

Cache of arms belonged to the insurgents were also destroyed in the drone missile strikes, he said.

Militant group have not yet commented over the drone strikes.