You are here: Home / Senza categoria / US disagrees with Ankara, says Syrian-Kurdish YPG not terrorists 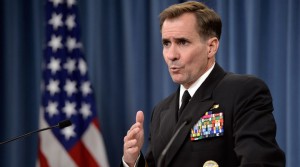 “We don’t consider the YPG a terrorist organization, and they have proven successful against ISIL [Islamic State of Iraq and the Levant] inside Syria. And as I said, we’re going to continue to work with counter-ISIL fighters who are and can be successful against this group, and they’re not all Kurds,” Kirby said at a press conference in Washington, in response to a question about the gap between the Turkish and U.S. stance on the group.

“We understand that the Turkish government has concerns about the YPG. We continue to talk to them and engage them. We continue to be appreciative of the support that Turkey is making to the coalition and to direct kinetic activity against ISIL,” Kirby said.

Kirby added that the coalition has come together for a common goal. “You do not have to agree on every issue; and you bring to the fight what you can, where you can, and when you can. And that’s how we’re managing this very important struggle.”

Turkish officials have repeatedly raised concerns about the YPG’s ties to the outlawed Kurdistan Workers’ Party (PKK), but have also said the group is not a target unless it targets Turkey.