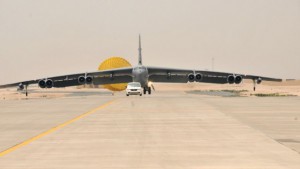 merican warplanes eliminated a “significant chemical threat” to Iraqi civilians by bombing a complex of buildings near the northern city of Mosul that Islamic State militants had converted from pharmaceutical manufacturing to chemical weapons production, the three-star general in charge of US air operations in the Middle East said Tuesday.

He provided no details on the chemical production.

Harrigian described the airstrike as a large, well-planned operation, which destroyed more than 50 targets at the site with a variety of US warplanes, including Air Force B-52 bombers and Marine Corps F-18D attack planes.

Other US officials said later that a total of 12 US planes were used.

Harrigian said the mission was part of a broader effort to cut off the Islamic State’s main sources of revenue, kill their leaders and create “organizational dysfunction” in ways that will eliminate the group as a military threat in Iraq and Syria.