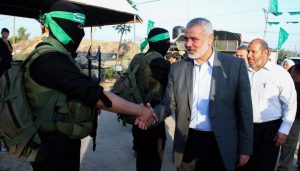 The US has accused Ismail Haniyeh of involvement in Hamas militants’ attacks on Israelis and Americans. The group countered that the decision would not deter it from “continuing the resistance”, like reported by egyptindependent.com.

The United States placed the head of the Palestinian militant group Hamas, Ismail Haniyeh, on a terrorist blacklist on Wednesday.

“Haniyeh has close links with Hamas’ military wing and has been a proponent of armed struggle, including against civilians,” the US State Department said, adding that he had been involved in terrorist attacks targeting Israelis and Americans.

The decision bars the 55-year-old from financial transactions with American citizens and companies and freezes any assets he may have in the United States.

‘This decision will not deter us’

Hamas, which has been on a US terror blacklist since 1997, brushed off the announcement as a “failed attempt to pressure the resistance.”

“This decision will not deter us from continuing the resistance option to expel the occupation,” it said, referring to Israel’s formal occupation of Gaza since 1967.

The Islamist organization has fought three armed campaigns against Israel since 2008.

Hamas took control of Gaza in 2007 after ousting rival Palestinian group Fatah. Since then, Hamas leaders have had a fraught relationship with the Fatah-dominated leadership of the Palestinian National Authority (PNA).

Haniyeh, who took over as Hamas leader in May, was a vocal critic of US President Donald Trump’s decision in December to recognize Jerusalem as Israel’s capital.

He said the announcement “crossed every red line” and called on Palestinians to resist it: “This Zionist policy supported by the US cannot be confronted unless we ignite a new intifada.”

Bloody protests erupted for days after the announcement in many Palestinian territories as well as some Middle Eastern countries.

“These designations target key terrorist groups and leaders … who are threatening the stability of the Middle East,” US Secretary of State Rex Tillerson said. “Today’s actions are an important step in denying them the resources they need to plan and carry out their terrorist activities.”