You are here: Home / Africa / US deployed troops and drones in Cameroon against Boko Haram 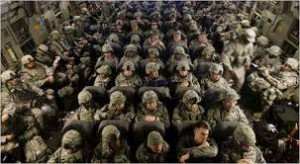 The Defense Department plans to send as many as 300 U.S. troops to the West African nation, in what officials said is expected to be a temporary mission against the militant group. Flushed from its Nigerian base by that country’s armed forces, Boko Haram is threatening neighboring countries like Cameroon.

The U.S. troops in Cameroon, who began arriving Tuesday, will support the operation of unarmed MQ-1 Predator drones to conduct surveillance and reconnaissance operations against Boko Haram.

Overall, the U.S. military has about 7,000 troops in Africa, with many at its base in Djibouti. U.S. Africa Command, which is based in Stuttgart, Germany, has small contingents of forces conducting temporary training missions around Africa.

Those operations help African countries allied with the U.S. to secure their borders against violent and illegal activities “disrupting our common desire for stability in the region,” the Pentagon said, noting that the deployment came at the invitation of the Cameroon government.

Once the full U.S. force of 300 arrives, the troops could take on the additional task of training Cameroon forces, a military official said.

“This gives us an opportunity to train alongside the Cameroonian soldiers,” the official said.

Boko Haram has come under increased pressure from Nigerian forces. Although increasingly unable to control territory in Nigeria, the group continues to kidnap women and children and attack civilian targets.

“Most of their attacks are against the civilian population to instill fear,” said a U.S. official.

While the group has released some captured women in recent months, the total number they have kidnapped remains far higher, the official said.

The bulk of Boko Haram’s attacks have occurred on Nigeria’s border with Chad and Cameroon, officials said. But their recent attacks show the group no longer believes they can face off directly against the Nigerian military.

“They don’t feel they can take on a head on operation against the Nigerian army,” the official said. “They are degraded.”