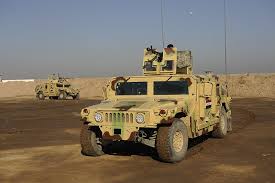 The United States announced on Thursday the delivery of 52 Humvee military vehicles and a patrol boat to help Tunisia counter jihadist violence and ward off the insecurity of neighbouring Libya.

The 52 HMMWVs aim “to improve force mobility” of the Tunisian army, the US embassy in Tunis said.

It also announced the delivery of a 65-foot (20-metre) patrol boat, the first of four to be supplied in the coming year.

“These vessels will join a fleet of 22 other US-manufactured boats… delivered since 2013,” the embassy said.

“The United States is pleased to support these efforts and help Tunisia on its pathway to a secure future,” it said, without specifying if the deliveries were aid or a commercial transaction.

Washington announced last month, after jihadists killed 21 foreign tourists and a policeman in a March 18 attack on the National Bardo Museum in Tunis, that it plans to double assistance to Tunisia’s security forces to $160 million.