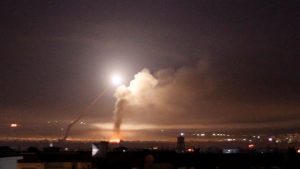 US officials confirmed on Tuesday that the Israeli missile strikes targeting Latakia overnight have struck “a facility that Iran was using to house sensitive military equipment” that it would later transfer to Hezbollah in Lebanon, like reported by thenational.ae.

The US narrative matches with that presented by Israel where Prime Minister Benjamin Netanyahu took responsibility for the attack.

on Tuesday, and Netanyahu said that his fighter jets “targeted a facility from which systems to manufacture accurate and lethal weapons were about to be transferred on behalf of Iran to Hezbollah in Lebanon.”

The Syrian official news agency said at the time of the attack that it targeted the “Technical Industry Institution” in Latakia. Local media in Syria said 11 people were injured in the attack while Syrian Observatory for Human Rights estimated at least two were killed, according to AFP.

In a conference call from Baghdad, Colonel Sean Ryan, the spokesman for Combined Joint Task Force-Operation Inherent Resolve (anti ISIS coalition), said that Israel did not notify the coalition beforehand of the strikes. “They operate independently. They’re not operating within our coalition communication system,” ColRyan said.

At the White House and the State Department, the focus was on the downing of the Russian aircraft near Latakia. US president Donald Trump called it a “very sad thing” and “not a good situation.”

Mr Trump blamed the Syrian government for the incident. ”It sounds to me and it seems to me, based on a review of the facts, that Syria shot down a Russian plane. And I understand about 14 people were killed and that’s a very sad thing but that’s what happens,” he said.

US Secretary of State Mike Pompeo expressed “sorrow for the death of the aircrew members of the Russian plane.”

In a statement he said that the “unfortunate incident reminds us of the need to find permanent, peaceful, and political resolutions to the many overlapping conflicts in the region and the danger of tragic miscalculation in Syria’s crowded theatre of operations.”

He called for a settlement in accordance with UNSC Resolution 2254 and “to end Iran’s provocative transit of dangerous weapon systems through Syria” which he called “a threat to the region.”