You are here: Home / MidEastGulf / US conducts airstrikes in support of Iraqi troops attempting to retain control of key refinery 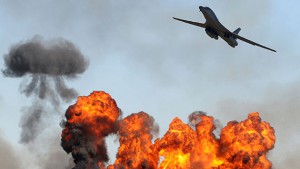 The U.S. conducted 26 airstrikes in the vicinity of a major oil refinery in Iraq in an effort to support Iraqi forces who have lost ground at the refinery to ISIS fighters, Chairman of the Joint Chiefs of Staff Gen. Martin Dempsey said.

On Wednesday, Pentagon spokesman Col. Steve Warren acknowledged that ISIS militants had taken “some” of the refinery, and that it was difficult to know whether Iraqi Security Forces would be able to hold off the ISIS fighters.

“The Iraqis are…under pressure there,” Dempsey said Thursday, “and have lost some control of the perimeter and some of the road network that leads to it through the emplacement of especially IEDs.”