You are here: Home / Mediterranean / US: Conducting drone operations in Libya from a Tunisian base 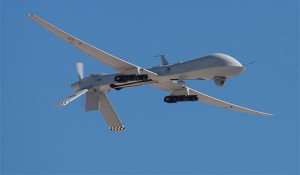 The United States has begun using a Tunisian air base to conduct surveillance drone operations inside Libya, the latest expansion of its campaign against Daesh in North Africa, US government sources revealed yesterday.

The unarmed drones have been flying out of Tunisia since late June and are now part of a US air defence in support of Libyan pro-government forces fighting to push Daesh out of its stronghold of Sirte, the officials said, speaking on condition of anonymity.

The use of the Tunisian base, which was first reported by the Washington Post, extends the US military’s ability to gather intelligence on Daesh in Libya, the US sources said. Other locations in Africa where US drones are launched, including Niger and Djibouti, are farther away.

In Tunis, a Tunisian defence official, speaking on condition of anonymity, denied that the droneswere flying into neighbouring Libya and said they were instead used for training Tunisian forces and protecting the country’s borders.

US officials said the Air Force Reaper drones were being operated by US personnel with Tunisian government approval from an existing base operated by Tunisia’s military and were currently used only for surveillance. But such unmanned aircrafts are also capable of being armed.

“There are US service members working with the Tunisian security forces for counter terrorism and they are sharing intelligence from various sources, to include aerial platforms,” said US Army Colonel Mark Cheadle, spokesman for US Africa Command.

Tunisia, a close US counterterrorism partner, requested additional military equipment and training from Washington after deadly militant attacks last year and has been given more than $250 million in security assistance, Cheadle said.

Tunisian Defence Minister Farhat Horchani was cited by state news agency TAP as saying that Tunis has recently received reconnaissance planes and unmanned drone systems for training and to “monitor the southern borders and detect any suspicious movements”.

He said the presence of foreign troops in Tunis was in the context of “international military cooperation” on mutual interests.

Forces aligned with Libya’s UN-backed Government of National Accord have been fighting for months to liberate Sirte from Daesh, which took over the city amid factional infighting that emerged after the fall of Libyan strongman Muammar Gaddafi in 2011.

The pro-government forces have been bolstered by US airstrikes since August and in coordination with small teams of Western special forces on the ground.