You are here: Home / MidEastGulf / US coalition ‘not threatened’ by Russian aircraft in Syria: Pentagon 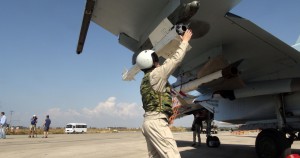 The Pentagon said Russian aircraft is no threat for the U.S. drones in Syria. The comment comes after Russian fighter jets were reported to have shadowed U.S. predator drones on at least three occasions in a week.

Pentagon spokesperson Lt. Col. Michelle Baldanza said the U.S.-led coalition did not feel threatened by the Russian jets. “At no time did the [US-led anti-ISIL] Coalition [in Syria] feel our remotely piloted aircraft were threatened and we expect Russian pilots to act in a responsible, professional manner if they encounter any coalition aircraft,” Baldanza told RIA Novosti Wednesday. “Coalition forces remain focused and committed to our mission to degrade and ultimately destroy ISIL.”

U.S. Navy Captain Jeff Davis earlier said a U.S. aircraft had to be rerouted to avoid a Russian fighter jet in Syria. While he did not reveal what kind of U.S. aircraft was involved, he said actions had been taken to “maintain safe separation.”

The U.S.-led coalition started its operation against Islamic State group in September 2014. Russia has been critical about the operation in Syria as the Assad regime did not approve of it. Moscow, on the other hand, started airstrikes against ISIS in Syria last week. Russia’s operation, unlike the coalition’s, has been approved by Syrian President Bashar Assad.

Baldanza said the U.S.-led coalition had kept on making clear to Russia that it was “deeply concerned about any actions taken against moderate Syrian elements.” U.S. authorities have been backing “moderate” rebels in Syria in its fight against ISIS and Assad.