You are here: Home / MidEastGulf / US Central Command confirms deployment of Patriot missiles in Iraq 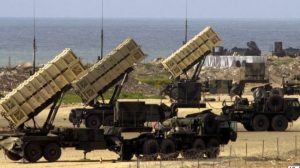 On April 5, a series of large explosions rocked the village of al-Kastan in southwestern Idlib injuring 8 people, including 3 members of the so-called White Helmets. According to local sources, an ammunition depot located in the civilian area inside the city became the source of the explosion, like reported by zerohedge.com.

Al-Kastan is located near the town of Jisr al-Shughur, controlled by the Al-Qaeda-linked Turkistan Islamic Party. The exploded weapon depot likely belonged to the terrorist group or persons affiliated with it.

On the same day, the Turkish military established three new ‘observation posts’ around Jisr al-Shughur. They are located at the villages of Baksariya, al-Z’ainiyah and Furaykah. Idlib militants see Turkish positions as an important defense line that would allow containing possible Russia- and Iran-backed anti-terrorist operations in the area.

The 46th Regiment Base of the Syrian Army in western Aleppo came under Turkish artillery shelling. In response, Syrian forces struck position of Turkish-backed militants near Kafr Amma. The attack on the 46th Regiment Base became a third incident between the Turkish military and Syrian troops in less than a week. On April 3, two Syrian soldiers were killed in a Turkish artillery strike on their positions near Tell Abyad.

On April 4, Iraq’s largest resistance groups released a joint statement calling the US military “occupation forces” that “respect the language of force only”. In the statement, Asa’ib Ahl al-Haq, Harakat Hezbollah al-Nujaba, Kata’ib Sayyid al-Shuhada, Kata’ib al-Imam Ali, Harakat al-Awfiy’a, Saraya Ashura, Harakat Jund al-Imam and Saraya al-Khurasani added that recent attacks on US forces and facilities in Iraq were only a “minor response” to the US aggression and the decision to carry out full-scale attacks was not taken then.

Two days earlier, on April 2, Usbat al-Tha’ireen, the armed group that claimed responsibility for rocket strikes on Camp Taji and other US positions, released a 3-minute long drone footage of the US embassy in Baghdad’s heavily-fortified Green Zone. This is the largest and most expensive embassy in the world, and is nearly as large as Vatican City.

The US Central Command officially confirmed deployment of Patriot air defense systems in Iraq. However, the US military announced that it will not provide “ status updates as those systems come online” for security reasons. At least two Patriot batteries are now located in at the US military bases of Ayn al-Assad and Erbil. Two more Patriot batteries will reportedly be deployed soon.

As part of its plan to redeploy forces to larger, more fortified bases, the US evacuated its troops from the al-Taqaddum Air Base in the province of al-Anbar. It became the fourth US military facility abandoned in Iraq within the last few weeks. The previous ones were located in al-Qaim, Kirkuk and al-Qayyarah.

Iraqi sources say that the US actions demonstrate that Washington is preparing for a new round of military confrontation with Iran and its allies in the region. Recently, President Donald Trump stated that the US was expecting attacks by Iranian-led forces on US troops and facilities, claiming that Iran will ‘pay price’ for this. Following the statement, Iran deployed additional anti-ship missiles and multiple rocket launchers on the Qeshm Island in the Strait of Horumz.