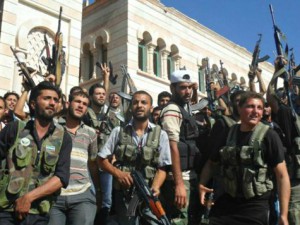 A Syrian rebel group which is part of a new U.S.-backed alliance that also includes the Kurdish YPG militia announced on Thursday plans for an imminent offensive against Islamic State militants in Raqqa province, the jihadists’ stronghold in Syria.

U.S. Defence Secretary Ashton Carter said earlier this week the U.S.-led coalition would support local forces as they put pressure on Islamic State in Raqqa and in neighbouring Iraq.

Washington has announced a shake-up of its support to the rebels battling the forces of Syrian President Bashar al-Assad, ending a programme to train fighters outside Syria and instead providing weapons to groups under U.S.-vetted commanders. It has already dropped ammunition to rebels in the north, but has not specified which groups the aid was bound for.

The Raqqa Revolutionaries Front, which made the announcement in an online video statement, is one of several rebel groups that recently formed the alliance. The group said earlier this month U.S. weapons were on their way.

“We will soon announce zero hour for the beginning of the battle of liberation from oppression and persecution,” leader Abu Issa said in the video, which was posted on Youtube by an activist group called Raqqa Is Being Slaughtered Silently.

“It will be an historic battle, for Raqqa first and Syria second,” Abu Issa said, appealing to the local population.

“Today we declare Raqqa province in its entirety a military zone. For this reason its people must not go near areas where there are Daesh elements” for their own safety, he said, using an Arabic acronym for Islamic State.

He did not mention U.S. military aid, nor the name of the wider alliance formed earlier this month, the Democratic Forces of Syria.

The alliance includes the Kurdish YPG militia and a number of Syrian Arab rebel groups such as the Raqqa Revolutionaries Front, which consists mainly of Arab tribal insurgents drawn from the area.

The Arab groups in the new alliance are operating under the name “The Syrian Arab Coalition”.

Carter told the Senate Armed Services Committee on Tuesday the U.S. military would intensify air strikes and might carry out more ground attacks against Islamic State.

He said the United States was now supporting Syrian Arab forces already inside the country fighting IS rather than trying to train completely new moderate Syrian fighters outside the country, an effort that cost millions of dollars and produced few trained troops.